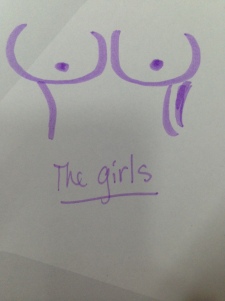 I was inspired by the nymag.com article to draw my own pair

This is a somewhat odd, middle of the week post. I don’t usually overshare personal reflections in this blog, but I just came across the article, “New York Women Draw Their Own Boobs” on nymag.com, which amused me. Reading it, I had an immediate flashback to my mom, getting dressed. I don’t know if she would appreciate me sharing this, but she’s not shy about getting dressed in front of her kids, even now that we’re grownups. When she needed to take off or put on a top, for instance, and we happened to barge into her bedroom to ask her something or talk to her, she would just blithely go on doing what she was doing, without self-consciousness, as if it were perfectly natural for her kids to see her naked. And we all got used to it, growing up. It was just mom being mom.

I guess because of her attitude that I never really had a complicated relationship with my own breasts. And I’d get really weirded out by friends who had such angst over theirs. To me, they were just there — a part of me — or not part of me. Maybe because I was a late bloomer. Growing up, and up until I was in my early 30s, I was really thin and didn’t have much by way of “boobage”… I remember a gay college classmate telling me one day, while I was wearing a really nice sundress, “It’s a good thing you have hips and a butt, because you would just be stick straight.” He meant it as a compliment. I could wear a tank top, no bra (though I didn’t. It wasn’t exactly frowned upon, but my mom insisted on a bra always when I was out and that stuck) and jeans and traipse around the campus, with no one bothering me. Contrast this to a good friend who would wear oversized T-shirts and roundnecked shirts because she developed early and was always conscious that guys were staring at her breasts. The fact that she was also drop-dead gorgeous might have something to do with it as well, but I remember she only fixated on her breasts, maybe because she got them a little too early.

I started getting them in my mid-30s when I started gaining weight and by then, I was enough of my own person that they never really impinged on my life, until those times when they would become the focus. Like when I’d catch guys staring or the boyfriend would say that he likes them. Or when girl friends would comment, “Shit, Terrie, you have big boobs!” as if they themselves were suddenly made aware of these apparitions. Or when we’d all good-naturedly compare our sizes (the way young boys compared dicks) — and I’d humble-brag that they can be a hassle. The only time that I was embarrassed about them was during a trip. A friend and I were at a resort, where Another Friend (AF) and her husband and their friends were staying. We were going to have dinner with them. Because it was an informal dinner and we had just come from swimming, my friend and I just put on coverups and off we went. I remember AF had this odd look on her face when she greeted me. Didn’t think much of it at that time, until she suddenly blurted out when we were having cocktails, “Gosh, Terrie, your boobs are really huge! I wish I could borrow them!” and all of a sudden, my breasts seemed to be the focus of the evening! The moment got glossed over, of course. But I was self-conscious the whole evening after that.

But that was only one of a few times. Most of the times, my boobs and I get along extremely well. Sometimes I wish they were smaller, but that’s only because I couldn’t fit into an outfit I wanted — they can sometimes get in the way — which can be a problem for someone who occasionally obsesses about clothes like I do. (Though, I don’t think it’s my problem, as much as it is more a reflection of how the fashion industry is still grappling with the diversity of women’s sizes — but that’s another story for another time.) But then, I learned — and am still learning — to complement my figure in my fashion choices.

So boobs. Yes, I have them. And yes, I like mine, thank you very much! And yes, this is a strange thing to be thinking about in the middle of the workday, but there you go. These things happen.

My name is Terrie. I write for a living and blog for pleasure. Some days, I get up in the morning and know precisely what kind of day it is. At other times, I get knocked over for a loop. People seem to like confiding in me. When I was younger, I thought I knew everything and can tell you what you need to do if you ask me. Now that I'm older, I realize I don't know anything. That's been my motivation for the blog and for writing. To figure out the unknown and unknowable. View all posts by pinxwitch

#HANASHTAG: The Chronicles of Ishna Vera