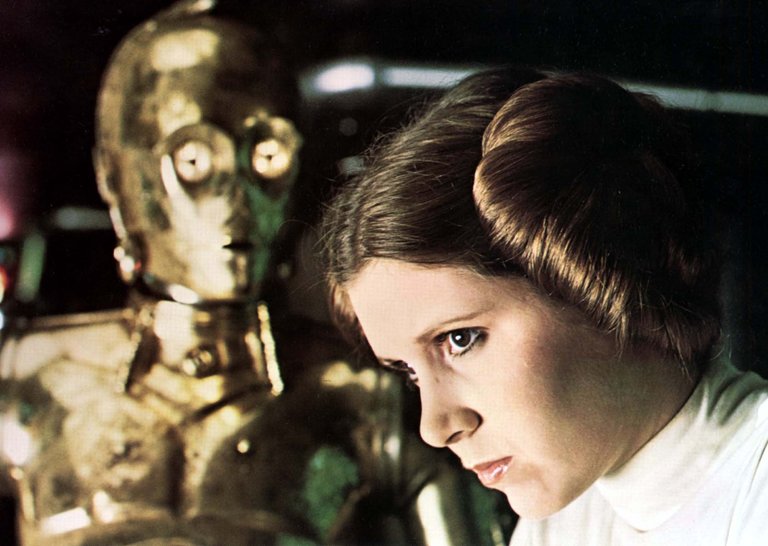 Carrie Fisher — Princess Leia Organa to fans — has died today. May the Force be with her.

I was about to sleep early this morning when The New York Times alerted me that Carrie Fisher has died. I was very sad. She was part of my childhood and now that childhood is indeed gone. To me, growing up with Princess Leia — and to be clear, I am a casual Star Wars fan — it seemed natural that someone can both be a princess and know how to fire a gun (or whatever they fired in Star Wars) and accurately at that. I took it for granted that a woman could look sexy in a gold leather bikini and end up killing the big bad slug. Or that a woman can take charge and actually be good with — and look good doing — it. She was a direct link to other heroes, and may probably have shaped how I liked my female protagonists, be they in movies, TV or books. I never liked the Disney princesses who needed a prince to rescue them, I questioned why the original Charlie’s Angels were chasing baddies in heels and had to wear sexy clothes to solve murders, among others. She even cast a shadow on my style choices as a young girl. I remember my mom asking why I was always in shorts or jeans and a T-shirt instead of one of the frilly dresses she bought me (“Magbihis ka naman, kababae mong tao.” Translated to: “Will you please dress up properly, you’re a girl!”). To this day, I still am not a fan of frilly dresses or overly styled clothes, but though my style has evolved and I can appreciate more feminine clothes, I recognise that how you look ultimately does not matter, it’s sass and grit, lots of humor and not a small amount of intelligence that matter in the end.

Carrie was also special to me for another reason — she was a damn good writer. I first learned that she could write when I picked up a battered copy of Postcards from the Edge from a Booksale in the Philippines. Booksale was this chain of bookshops in my country that sold second-hand books. Back then, I could never pass by one without ending up spending at least 30 minutes browsing the shelves. So, anyway. I picked up a copy of Postcards, saw that it was written by her — was not even sure it was her, till I flipped the book and there she was, in a glam-shot author’s photo in the book jacket — and decided to buy it. Bought it out of curiosity mostly. I figured if it was an awful book, I would only have lost a few pesos. It turned out to be a hilarious account of an actress as she overcomes her drug addiction,  gets back into showbusiness and falls in love… well, sort of. One could argue that Carrie was just mining her life for material. But hey, if she can’t mine her own rich life as material, then who can? The book was a revalation. As the protagonist, she was funny, and witty, with lots of observations about her messed up life that surprisingly resonated with a young, stressed out college-aged Filipina trying to find herself. When her other novel, Surrender the Pink, came out, I had no hesitation about getting a copy. Because of life upheavals and moving from place to place, I don’t know where those books are now. Maybe it’s time for a re-reading. (For more of Carrie Fisher’s career as a writer, read The Verge’s article here.)

PS: Richard Adams, author of Watership Down also died today (Oh, 2016!). He was also one of my favorite authors. In terms of world-building, Watership Down’s, for all that it’s about rabbits, is as compelling in its own way as Tolkien’s The Lord of the Rings trilogy, GRRM’s A Song of Ice and Fire and others. I am so sad he’s gone. Like Fisher’s books, it’s time for a re-read of Watership Down. Wonder where my copy is…

“My heart has joined the Thousand, for my friend stopped running today.” — Watership Down, Richard Adams

My name is Terrie. I write for a living and blog for pleasure. Some days, I get up in the morning and know precisely what kind of day it is. At other times, I get knocked over for a loop. People seem to like confiding in me. When I was younger, I thought I knew everything and can tell you what you need to do if you ask me. Now that I'm older, I realize I don't know anything. That's been my motivation for the blog and for writing. To figure out the unknown and unknowable. View all posts by pinxwitch

2 thoughts on “There is a great disturbance in the Force”

#HANASHTAG: The Chronicles of Ishna Vera