This is a morbid topic and totally strange to be thinking about now, but I guess it’s been on my mind because a milestone is fast approaching (again!), and when one dwells on birth, one also thinks about death. You can’t have one without the other, diametrical opposites… yin and yang, light and dark…

I agree with the writer though — the death scenes in the final six minutes of Six Feet Under‘s series finale is also my top death scene. I cried so hard when I was watching this — not because the deaths were sad and affecting, because they were, but because of how the deaths framed the lives of the characters in the series. This was what happens after ever after — and the deaths were a fitting close to a wonderful series. So on tear levels, and how swollen my eyes got from crying, and number of tissue packets consumed here are some of my favorite characters’ death scenes. (These are not in order though. And I will probably need to do a part 2 of this after catching up with my TV debt!):

Dr Mark Greene (ER) — Sure, the show went all over the place in the latter seasons and they milked Mark Greene’s dying for all it was worth, but still, this guy was the heart and soul of the show and to have him die? I bawled — especially when he left on his last day and told Carter to “set the tone” in the ER, effectively passing the torch. Rating: Tears, snot, swollen eyes, tissue packets galore.

Ned Stark (Game of Thrones) — Winter came — and it was tragic! Only George RR Martin would have the balls to kill of a major charismatic character in the first season. This was the death that was heard around the world as fans howled in collective outrage at this death. As a writer, I recognize how ballsy it was for GRRM to kill off a beloved character, but as a fan, it totally sucked big time. Rating: No tears. I was so angry! Tears came later, and mourning. I am still not over it, actually. The poor Stark kids!

Omar Little (The Wire) — One of the best characters ever to come out of television, Omar was like a mythic figure in The Wire. He was who the drug lords were afraid of, ruthlessly taking their money and killing them off when they cross him. As he says, “You come at the king, you best not miss…” And to meet his end at the hands of a punk ass kid?? it just ain’t right. Then again, his death was poetic justice in a way. As they say in the streets of Ba’more: It’s all in the game, bey. Rating: A bowl of Honey Nut Cheerios (his favorite cereal) as a toast! It was after all, a good death.

Wallace (The Wire) — as played by Michael B. Jordan, Wallace was a wee kid who got entangled in Baltimore’s drug trade in The Wire. Ordered killed by the Barksdale drug kingpins for informing on them, Wallace was shot by his two “friends”. Tragic! Rating: Sleepless nights, lots of tissue packets. Wallace was killed in the first season, which just goes to show how committed the creators are of this show to the truth of the story. And ballsy too — they killed a kid!

Dr. Juliet Burke (Lost)–How’s this for tragic: You get stranded on a strange island after you’ve helped cure your cancer-stricken sister and helped her have a baby, forced to be an ob-gyne/fertility expert to a bunch of weird islanders, get attracted to a messianic doctor who only has eyes for an ex-convict, gets thrown around in time but not before finding the love of your life, only to die a tragic death when a bomb explodes just as you were helping save the world. Ugh. Rating: Packets of tissues. Lots and lots — especially that last few scenes with Sawyer. True love doesn’t mean ever after — at least on the island… in the Sideways episodes.

Joyce Summers (Buffy and the Vampire Slayer) — One of the best written episodes in the series, and there wasn’t even dialogue or  sound when Buffy discovers her mom dead on the sofa. The scene was so ordinary and yet so horrifying because it demonstrated how transient and quick life can be. And how ordinary death is, which makes this scene even more tragic. My dad died when I was 16. I remember my mom waking me and my brother up because my dad was having a heart attack and she needed our help. My brother ran to the neighbors to get someone to drive the car to take my dad to the hospital, while I helped my mom make my dad comfortable. I remember that night as going by so fast and incredibly slow. I remember snatches of what my parents were saying to each other and yet I remember the awful silence too, as if sound couldn’t keep up with what was happening. So when I watched this episode, it brought me back to that night, and I knew exactly what Buffy was going through. Rating: A roll or two of toilet paper, and lots of bawling. A sleepless night. Swollen eyes. A headache in the morning. And more crying after.

Reading the final matchup of Vulture’s Drama Derby and as I predicted, it would come down to these shows. I’ve watched The Wire twice in its entirety and anyone who knows me knows I love the show. I haven’t seen The Sopranos and that’s in my TV debt. I haven’t finished reading the article yet, but I already know who the winner is. In just its scope of themes, deep acting bench, great writing, it’s going to be The Wire.

My dad’s been on my mind lately, I don’t know why. It’s not his birthday or death anniversary. Maybe because he influenced us kids about shows like this. He loved drama shows and I remember watching Hill Street Blues with him — which is probably why I also love cop and drama shows. He would have loved these articles. 😉

Yep: It’s The Wire for the win. 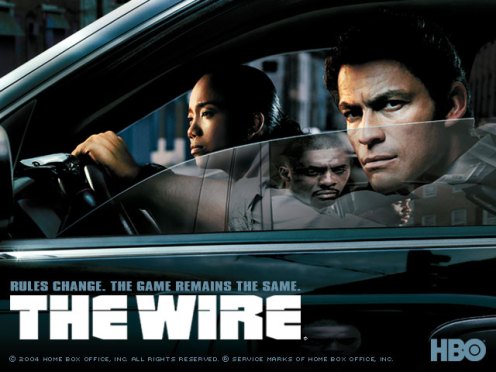 Yesterday, I wrote a looong entry on my summer reading list. Now, having just finished an article about a luxe resort I haven’t been to, what do I do? I spend my free time reading The Slate Club’s multi-parter discussion on The Wire! I am such a nerd!

“There’s a thin line between heaven and here.”—The Wire.

Got hooked on the HBO series The Wire. I have the first two seasons which I watched continuously for two straight weeks. And I can’t get enough of it. It’s six seasons long so I have to get seasons 3-6 soon! Great cast, fantastic writing, and and a complex storyline that demands not just your attention but engages your mind. You have to watch it to understand why this is my current obsession. (Of course, it helps that Dominic West is gorj!). This is one of the best scenes in the series so far. TV writing at its finest.